Fernando Loja and Rosa Guzmán l ucharon and managed to ensure that their artistic vocation does not die with them. His sons Ismael, 28, and Fernanda , 27, followed his legacy in making miniature pottery pieces , in the Chordeleg canton. 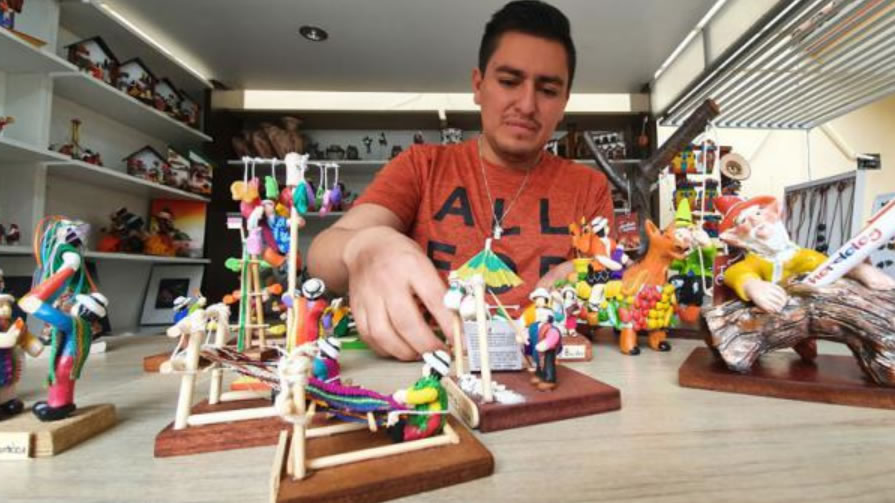 They make up the only Azuay family who have dedicated themselves to the art of creating indigenist figures, between 1 and 4 centimeters tall. The pieces rescue the richness of customs and traditions of all ethnicities and peoples of Ecuador.

Pottery became a family inheritance. Ismael and Fernanda became the third generation dedicated to this activity. His grandparents and parents started making pots, plates, vases and pots. This trade was his main livelihood.

Ismael said that his parents dabbled in miniature human figures 24 years ago, for two reasons: the first, according to them, was because foreigners valued pieces that reflect tradition and identity ; and the second, because they wanted to show the cultural richness of Ecuador.

The workshop-gallery is in the community of Chaurizhín , two minutes from Chordeleg. They grew up in that environment – between mud, brushes, paints and fabrics – and learned to work the raw material and mold by hand objects.

Like his parents, the first pieces of the young people were the cholas Cuenca , farmers carrying firewood, cane cane spinning, selling flowers or fruits, village bands, dancing Tucumán, mayorales, among others.

But as adults, they innovated and imposed their own brand called Kapchiy , a Kichwa term that means “ following the legacy ”. Under that seal they make pieces and paintings in third dimension and jewels in gold and silver , with tiny ceramic sconces .

At this time they have maintained the cultural line and the same materials they believe are optimal for the low ecological impact and malleability . This is said by Ismael , who with unique works has participated in competitions and fairs of the Inter-American Center of Crafts and Popular Arts.

Your work begins with the preparation of the raw material. The land comes from the mountains of the parish La Unión , from the same canton, and the Azogues kaolin . To that base – stony as stone – he removes the impurities and soaks it one day, so that it becomes loose.

Then add the kaolin and knead until it is a smooth texture . Finally cover the mud with a plastic to maintain its elasticity. With that clay he creates the works that come out of his imagination, from what he sees in popular expressions and in everyday life.

In the works of Ismael and Fernanda there is skill, inspiration , desire to convey something new, originality and identity. They explore proposals and combinations of other fields such as architecture , clothing design and furniture.

Almost all the pieces are unique, because they don’t use molds. Fernanda is a teacher and in the afternoon she unleashes her imagination. She makes masks of traditional festivals , such as the Diablada de Píllaro, the Diablo Huma, the dancers of Pujil í, among others.

That plurality, persistent attitude and love for work have made both recognized and valued.