The Court of the National Court, composed of Judges David Jacho, Wilman Terán and Iván Larco, accepted the request made by the State Attorney General (subrogate), Wilson Toainga, and decided to deny the appeals filed by former President Rafael Correa , by former Vice President Jorge Glas, by former Minister Vinicio Alvarado, Secretary of Water Walter Solís and two other former officials of Correism. 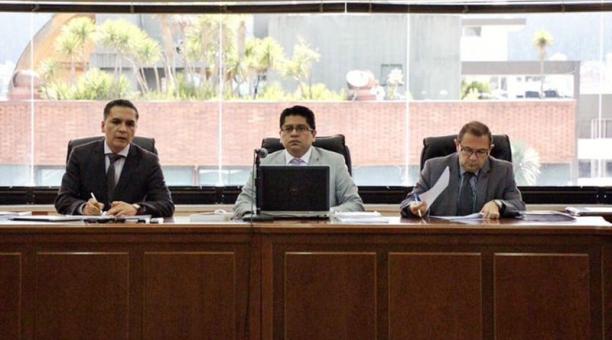 All are prosecuted for the alleged crimes of bribery, illicit association and influence peddling, in the case of Bribes 2012-2016. With this, the magistrates ratified the preventive detention against everyone.

The lawyers of the defendants requested that the detention be revoked, arguing that the requirements for issuing that measure have not been met and that other alternative actions are provided, such as the periodic presentation before the authority and said that the presence of citizens is guaranteed in the criminal process

For his part, the Deputy Prosecutor pointed out that the requests do not comply with the requirements established by the Organic Comprehensive Criminal Code (COIP) and requested that the resources be dismissed and that the preventive detention be ratified, taking into account that both the request made by The Office of the Prosecutor, such as the acceptance of it by Judge Daniella Camacho, complies with the legal parameters.

Given the argument of several of the defendants, who indicated that the measure is exaggerated and that it responds to political reprisals, Prosecutor Toainga said that the work of the Prosecutor’s Office is absolutely objective and technical, based on the provisions of the Constitution and the Law.

The Court unanimously resolved to ratify the preventive detention by considering that Judge Camacho’s initial decision complies with the requirements of article 534 of the COIP and that, therefore, the precautionary measures are fully motivated and justified based on the principle of legality.

The State Attorney General’s Office investigates the alleged contributions made by state contractors, through cash or invoice crossing, for the benefit of a political movement.

In this case, the preparatory trial hearing against 24 people will be reinstated on Monday, November 11, 2019. In the diligence, Judge Daniella Camacho will announce her decision on the existence or not of procedural, procedural, competence vices and prejudiciality.