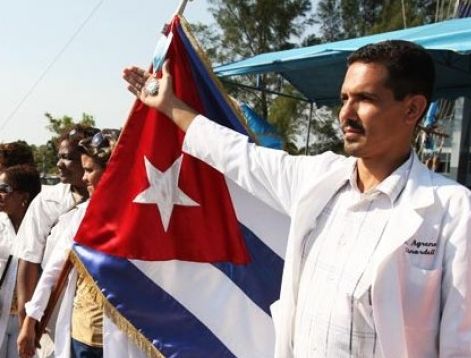 Cuba has sent a new medical equipment integrated by 165 sanitary, to combat the Ebola virus in African countries like Liberia, Sierra Leone and Guinea Conakry, where more than 4,500 people have already died because of the epidemic.

The head of the medical team Jorge Juan Delgado Bustillo, said to EFE that Cuban health professionals had never faced such a “complicated” situation as the fight against Ebola.

Doctors and nurses who make up the team to fight the epidemic will not return to Cuba for treatment in case they become infected with the virus, as explained to CNN’s the representative of the World Health Organization in Cuba, José Luis di Fabio .

There are now 256 professionals sent by Cuba since early October, from a total of 461 who have received training on the island to cooperate in combating the epidemic.

The last contingent arrived yesterday, Wednesday, to West Africa. “We’ve come here spontaneously, severally and for a personal decision to pursue our international medical work,” said a delegate from doctors.