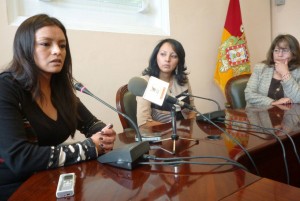 Ruth Caldas and Norma Illares, both councilors of Cuenca, were ejected from their charge by the Committee on Ethics and Discipline Alianza PAÍS ( AP ) because of ‘political disloyalty’ , this was published yesterday on the Twitter account of Doris Soliz, Executive Secretary of the movement.

This arrangement came after the accusation of their mates of the same ideology for ‘treason.’  Situation where Caldas was designated as Deputy Mayor in the first session of the cantonal council last Thursday with her vote, the votes of Mayor Marcelo Cabrera, six aediles of the ‘Participation Alliance,’ and the blank vote of Illares .

Moreover, the latter was elected member Councilor of the local board of government.

Meanwhile, Leonardo Berrezueta (Councilman for AP), who called for the expulsion, said that  the officialism bloc decided that he would be appointed as Deputy Mayor through previous meetings.

According to the AP renovated organic regime, among the causes considered of ‘serious misconduct’ for the final separation of the group, are ‘political actions that objectively benefit individuals or groups opposed to the policy of the Citizens Revolution’ and ‘to publicly express divergent views to undermine the principles and decisions of the movement.’

However, Caldas and Illares assured not to be afraid of the expulsion decision and were even willing to quit before the decision of the Committee on Ethics and Discipline was given. Now they have declared themselves independent.