Cuenca-Loja way is blocked due to the strike 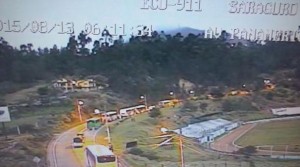 On early Thursday, protesters took to four sections of the Cuenca-Loja way, in southern Ecuador, to join the national strike called by trade unions and supported by the Confederation of Indigenous Nationalities of Ecuador (CONAIE).

In the Nabón county, Azuay province, representatives of indigenous and social sectors concentrated. They began the day with a ritual and tried to block vehicular traffic, but the intervention of the police did not allow it.

400 policemen were sent to guard the various main roads of the province and prevent roadblocks. On the Azuay roads leading to El Oro, Guayas and Morona Santiago provinces no problems were reported according to Peter Jijón, deputy chief of the police.

In the province of Loja, however, the ECU-911 reported three points that are still blocked with mounds of dirt and crowds of people. Indigenous organizations took to the San Vicente, San Lucas and Saraguro sectors.

In the eastern zone the Gualaquiza-Zamora road is also closed, in the Bomboiza sector, at the entrance to Morona Santiago. While roads connecting Zamora Chinchipe with El Oro and Loja are enabled.