Daryl Cagle: “The work of cartoonists is to criticize nations and their institutions” 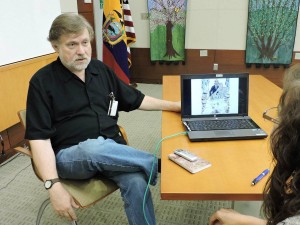 With a career spanning over 36 years, the American cartoonist Daryl Cagle defends the right of political cartoonists to tell a piece of their minds to the power.

Cagle, along with 6 other artists from various countries, was in Ecuador last week to participate in the “Second International Meeting of graphic humor,” organized by Xavier Bonilla (Bonil).

At 56, he shares his cartoonist art with the management company that represents other colleagues to sell their work around the world and whose bullets can be seen on the web at caglecartoons.com, which also has a section in Spanish.

His irreverence has brought him problems, but never serious enough to instill fear. A few years ago he was heavily criticized in Mexico by making a drawing of the flag of that country. “I was described as disrespectful, but amid the scandal many Mexican cartoonists sympathized with me; I would not do my job if I was respecting flags or national symbols.”