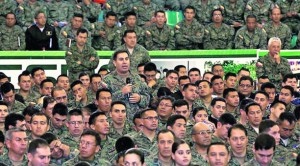 The Defence Minister, María Fernanda Espinosa, spoke to 1200 military and asked them “not be swayed by rumors” about the modernization of the Armed Forces. These statement was made on Tuesday at the Coliseum Miguel Iturralde of the Polytechnic School of the Army, in Sangolquí.

The purpose of this meeting was to report on the modernization of the Armed Forces, which seeks to fight crime, improve safety levels and reduce military spending.

Victor Garces, President of the Association of Generals and Admirals Armed Forces in passive service, said that the changes proposed by the government “will weaken the institution”.

For the regime, the change involves a reduction of staff, along with a reorganization of the functions of the the three forces.

7 months ago in a weekly address, Correa explained an incentive program, including an economic plan, for members of the Army who wish, for example, to integrate future security corops such as: customs, transit, correctional officers and environment.