They had failed so many penalties that Pedro Ortiz had the accounts gone. When he stretched his athletic figure, dressed in green, the goalkeeper who until three years ago made a living in second-order teams, such as Gualaceo, closed his fist and made a moderate celebration. 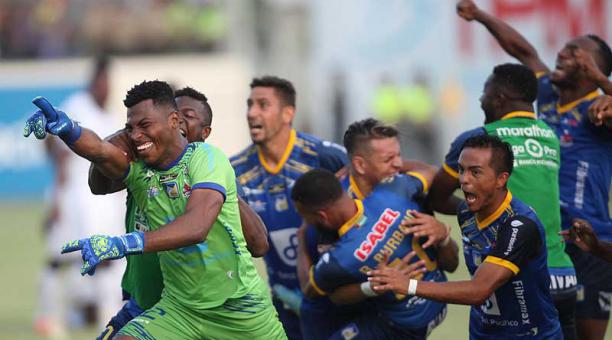 But when he saw the referee Roberto Sánchez decreed the end of the game, Ortiz started a crazy race that ended in the technical zone. His companions followed him to hug him, to tack him, to show his gratitude.

Ortiz cut the fifth launch of the Quito League, the tenth in the series. Dolphin beat 2-1, in a penalty shootout full of mistakes, but full of emotions. The cetacean box makes history. He sits at the big table of Ecuadorian football.

It is the third team outside Pichincha and Guayas that manages to conquer a national crown, behind Olmedo in 2000 and Deportivo Cuenca in 2004. In the third final of its history, after falling into the Ecuadorian tournament in 2017 and In the Ecuador Cup, last November, Fabián Bustos’s team manages to crown him until recently unthinkable: being the national monarch.

The deed of Ortiz and his teammates marks a milestone in the history of Ecuadorian football. In the definition, the followers dusted off the cry of ‘yes you can’ to harangue theirs. There were times when faith was broken, such as when Bruno Piñatares – the heart of the team – failed to launch or when Carlos Garcés, the captain, warned of his shot and allowed Adrián Gabbarini to shine.

But the feat had to be accomplished. Dolphin failed his pitches, but the League players were fatal at the time of hitting the goal.

The draw benefited them, as the shots were executed in the arc behind which were the fans albos. But the League failed the aim.

Only young Jordy Alcívar got his shot right. Antonio Valencia, Luis Caicedo, José Ayoví and Cristian Martínez failed. Too many mistakes to try to be champion. The match had to be settled in penalties, after a series full of calculations and where no team saw the green light in the goal.

In the end, Manabi celebrates his ascension to glory. He did it in the hands of his brave players, his coach Bustos, a lord strategist, and his leader José Delgado, cited in the team’s sports songs, on billboards and by the artists invited to the pregame show.

Dolphin will be Ecuador 1 in the Copa Libertadores. In the runner-up League, which has just ratified Pablo Repetto as coach for next year, there is much to reflect for the future. The team lacked character to submit the opponent on penalties.