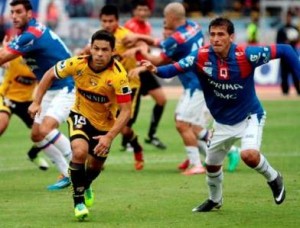 Deportivo Quito beat Barcelona 2-1 at the Atahualpa Stadium, where a decision of the referee, Diego Lara, generated a controversy near the end of the game.

After declaring as goal an action in which it was observed that the ball had not gone into the goal at minute 84, the central judge, assisted by Marco Muzo, determined that the “chullas” won 2-1 to the “toreros”.

The player from Dep. Quito, Christian Lara, generated the action, which mocked the mark of Pedro Velasco and goalkeeper Maximo Banguera, and he  kicked to the goal, where defender Luis Checa appeared and rejected the ball. Following this, the ball touched the body of Franco Peppino and left the field. There was no goal.

At first instance, the judge did not declared the score, and the capital players claimed as penalty an alleged Peppino hand, but then, the assistant Muzo informed him that the ball had entered, in a decision celebrated by local players, and claimed with indignation by the Barcelona fans.

IESS explains that proffesional memberships are not mandatory