After rescue and rehabilitation , reintroduction to the habitat seeks to give a second chance to animals that suffered attacks, poisonings or injuries. Many times, despite the best efforts, the consequences of activities such as hunting do not allow these specimens to survive long in the wild. 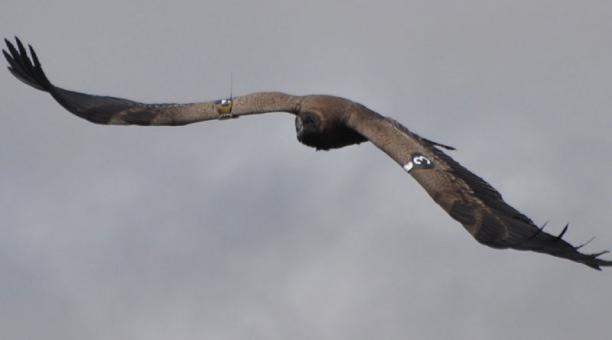 On Friday, September 11, 2020, the condor Iguiñaro joined the list of animals that, despite recovering from an attack, finally died when they were released. This bird was hit with a pellet in April of this year. Later, she was successfully rehabilitated in the Quito Zoo in Guayllabamba and in May she was released in the Chakana Reserve of the Jocotoco Foundation .

Six months later, his body was found in the Cotopaxi National Park . Although the cause of his death has not yet been confirmed, the autopsy shows that he was starved and it is being studied whether the initial attack influenced his outcome. This is the most recent case, but it is not the only one.

Felipe survived a hit, but was killed by a gunshot

Felipe’s case is one of the best known in the country. This was the first condor released and tagged with a satellite tracker in Ecuador. Fabricio Narváez, project coordinator of the Fundación Cóndor Andino Ecuador , says that this bird was found in 2013 with a picture of dehydration , disorientation and damage to its muscle fibers .

His treatment lasted several weeks, the signs of illness were reversed, and he was finally released. Seven months later, Felipe was shot that killed him. Narváez says that his body was found in an area historically considered conflictive due to the presence of hunting. Felipe’s marking allowed us to learn more about the behavior of these animals and the areas they inhabit.

Polito was the second condor marked in the country and Quipo the third. Both disappeared at the end of 2016 and are believed to have died of unnatural causes, although their bodies have not been found.

Polito was rescued in 2014 with a fracture in the zygomatic arch bone. Narváez recalls that the bird arrived at Parque Cóndor , where they noticed that it had an injury and treated it until it overcame the problem. Quipo , on the other hand, was just tired and disoriented. The two birds were tagged with a wing band and a satellite tracker .

The specialist explains that both were monitored for about three years. They were healthy and had already adapted to wildlife, so it is believed that their disappearance is related to unnatural causes. Between 2016 and 2017 their trackers stopped emitting signals and since then there have been no reports of these individuals. Nor were they registered during the four censuses that have been carried out in the country.

Yumbo disappeared in the northwest

Yumbo is the only bear of its kind in the country that has returned to the same habitat from which it was rescued, but its whereabouts are now unknown. This bear was found in 2013 in the northwest of Quito. His mother had abandoned him and he was condemned to die, until investigators found him and rehabilitated him .

Yumbo spent two years in captivity , preparing for his release . In 2015 he was repatriated with a satellite collar in an area near Yunguilla , but since 2018 there are no records of the animal . The fauna-animal conflict has been growing in the country and has become the main threat to this species.

Santiago Molina , associate researcher at the Laboratory of Ecology and Conservation of Carnivores of the San Francisco de Quito University and secretary of the Andean Bear Working Group , explains that a differentiation must be made between release and reintroduction . The former refer to animals that are monitored for a few months in their habitat, while reintroduced specimens are observed for at least two years. Few bears in the country have carried out this last process and Yumbo was one of them. The investigator does not lose hope that it will appear again.

D’yaira was the victim of illegal hunting

The jaguar D’yaira was rescued in 2017, after having suffered an attack with 18 pellets that left her quadriplegic. Veterinarians and human neurologists managed to restore the animal to mobility and to rehabilitate itself at the Tueri Wildlife Hospital of the San Francisco University of Quito. D’yaira was released in 2018.

The body of the jaguar was found seven days after she was released. According to the report given to the authorities, D’yaira died of acute lead poisoning, related to the pellets that were embedded in her body. These had not caused damage to the animal up to that point. D’yaira’s bones now rest in the Zoology Museum of the San Francisco University of Quito.