BREAKING NEWS
Flights in Ecuador fail to recover the frequencies of before the pandemic
Achievements of digital transformation are exposed in “A Digitized Country, A Modern Country”
Yaku Pérez: ‘I am not a supporter of violence; I am adept of a resistance ‘
If the bill for the Defense of Dollarization in Ecuador is not approved, the next IMF disbursement of $ 450 million would be put on hold
77 rural schools will open their doors amid the pandemic as part of a pilot plan
New technologies and the use of digital banking are key to reactivation, according to expert
Local mafias vie for spaces to operate with Mexican cartels
Remote work continues in the public sector of the Executive until March 14
A bacterium protects the lupine from its main threat and would increase grain production in Ecuador
Despite pandemic, air transport of flowers was the second best in eight years 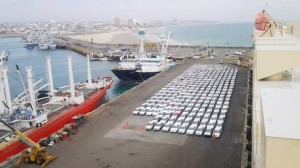 Manuel Murtinho, Manager of the Ecuadorian Automotive Association (AEA), said that the restriction on vehicle imports and the decreasing quota could impact the prices of new cars.

Murtinho said that would happen since more than half of the cars that were ordered to factories since mid-year for 2015 shall be returned by the concessionaires, which planned their sales without the restriction that was expected to finish last year.

This restriction is provided in Resolution 49 of the Comex.

Veronica Gaibor, Manager of Anglo concessionaire on the Domingo Comin Avenue, said that the list of new prices will be effective from Thursday.

$ 20 bills shall hereafter be issued with data