Doctors radicalized their opposition to the penalty for malpractice 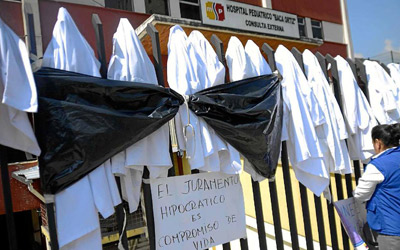 Doctors of the hospital Baca Ortiz in Quito joined yesterday joined the rejection of the new Penal Code, which difines a penalty of 3 to 5 years in prision of malpractice for cause of death.

With white aprons hanging on the gate and black ties, as well as signs saying “during 15 years of study I was not taught to kill, we are human beings, not gods, we are not criminals,” doctors showed their displeasure with the new code.

Francisco Barriga, anesthesiologist and President of the Association of Doctors of the Baca Ortiz, said that in case of being this article approved, this would cause the resignation of 287 doctors, it would affect the care because the hospital assist the most critical cases in the country and so far 13.056 surgeries have been attended , the 70% are congenital heart diseases and severe burns.

What doctors are suggesting is that sanctions be removed from the Code and included in the health as civil and administratives felonies.

Yesterday during the dialogue that doctors kept with the Secretary of Conduct in Goverment, Betty Tola, and the Minister of health, Carina Vance agreed that this proposal will be analyzed at a meeting scheduled for next Monday.

Given the warning of hiring foreign doctors for possible resignations the President of the medical College of Pichincha, Victor Álvarez, said that expect that there are courageous doctors from abroad who want to risk his freedom, his heritage with these laws.

Doctors from private clinics have also joined to this measure, they have announced sit-ins and a March for today.