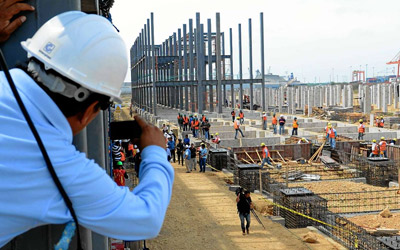 The President of Ecuador, Rafael Correa, yesterday inspected the construction of the new hospital in Guasmo, on the South of Guayaquil, which will have 400 beds and its operatinon is expected by 2015. This project requires an investment of $85,44 million.

The President said that this hospital will serve as a model for others that the Government will build in different cities where a standardized system will be used.

The Ecuadorian Government is also building a 400 bed hospital in the sector of Monte Sinai, in the northwest of Guayaquil, which will invest $70 million and the infrastructure is expected to be ready by 2014.

Carina Vance, Minister of Health, said that the hospital  in Guasmo will  provide a high standard technology for  various medical specialties and will benefit  1.14 million people.

In the Eigth Zone of the city, the Government plans to improve 410 educational units with a physics, chemistry, languages and natural sciences laboratories.

Fabricio Correa will not be the one who sue the Government