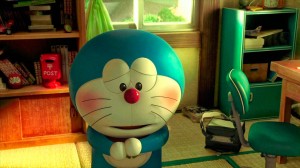 Japanese theaters debuted yesterday the latest adventure of robotic cat Doraemon, the first held in three dimensions and that coincides with the 80th anniversary of one of its two creators.

The film is inspired by several episodes of the original manga, and tells the story of Doraemon and his best friend, Nobita, from their first meeting and the time travel thanks to the special powers from the robot cat of XXII century. Takashi Yamazaki and Ryuichi Yagi, co-directors have tried to introduce a “new Doraemon” to the public that is already familiar with the character, while “able to enjoy for those unfamiliar with the manga”, explained Toho distributor in a statement.

Both directors who have worked together on the Japanese animated film Friends: Naki on the Monster Island (2011), decided to combine computer graphics with the projection technique in three dimensions to provide a more “immersive” experience for viewers.