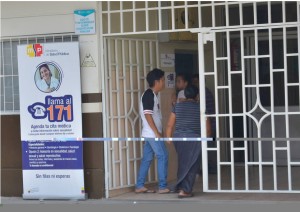 This drug is not pure, it is a mixture of heroin and harmful substances, said Patricio Zapata, provincial director of the National Council for the Control of Narcotic and Psychotropic Substances (CONSEP).

Elena Rodriguez, chief of the outpatient service at the Neurosciences Institute, estimates that between late 2013 and 2015 the number of daily cases has increased from three to twelve children and adolescents who use drugs, particularly “H.”

For example, a person was allowed to carry a gram of heroin, 50 grams of cocaine base paste, 300 grams of marijuana. That would have given rise to micro trafficking and a kind of massification in the supply of drugs in educational institutions, neighborhoods and according to mothers, and young children were exposed to the problem.

Faced with that reality, in September this year,the CONSEP modifies the table and reduces the amounts, for example, from 1 gram of heroin it went down to 0.1 g.

Patricio Zapata, provincial director of Consep, says that outpatient care in the units is covered and he agrees that they have “a weakness in the lack of rehabilitation centers.” They hire the services of two public and one private centers.