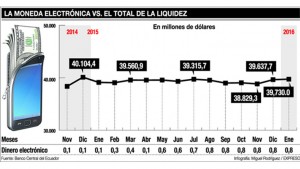 In Ecuador, the government has tried to boost several this new way of virtual payment, but only a few have implemented that offer. Otherwise, you have to look at the figures. Only $ 800,000 in electronic money are in the accounts of the Central Bank. To give dimension to that number: it represents only 0.002% of the liquidity of the country´s economy.

Virtual currency is barely nothing-compared to a mountain of 39,700 million dollars.- It was assumed that by the end of 2015 there would be about 700 thousand accounts, but no more than 60,000 have been opened, says Javier Andrade, deputy director of the Ecuadorian Institute of Political Economy (IEEP), who believes that the low inclination to use the E-money can be explained to a little promotion, but this is also an issue of lack of confidence on the part of the Monetary Code.

This establishes that the Central Bank has the power to manage the liquidity in the system and that involves electronic money, which is included in that monitored liquid mass. For Andrade, the expectation of economic actors is that digital money is used to finance the public sector.