Earthquake of 5.6 degrees was registered in Nicaragua 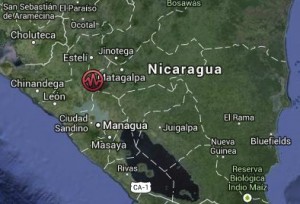 Nicaragua remained sleepless the early hours of Monday after the earthquake of 5.6 degrees on the Richter scale that shook Managua.

The quake occurred at 23H07 local time (05H07 GMT), with its epicenter located 1 km from Apoyeque volcano, on the coasts of Xolotlán of Managua, with no casualties reported, according to the Nicaraguan Institute of Territorial Studies (INET.)

The quake, which had two aftershocks of moderate intensity, was preceded by one of 4.9 degrees and 40 of smaller magnitude recorded during the day, left at least seven homes destroyed, and according to reports caused alarm on people.

Quakes were felt strongly in Managua and in the departments of León, Granada, Boaco and in the Pacific coasts of Nicaragua, which were produced at shallow depth, near the Momotombo volcano and Apoyeque.

The President of Nicaragua, Daniel Ortega, called in a message to the nation, to take extra security measures after the earthquake.