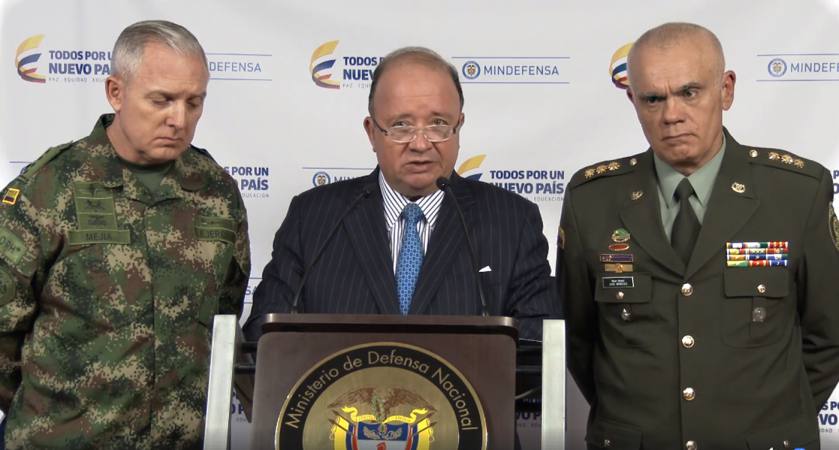 President Lenin Moreno yesterday requested support from the international community for the problems facing the country on the northern border, including the kidnapping of three Ecuadorians, in a meeting with the diplomatic corps accredited in Ecuador. At the end of the meeting, Monsignor Eugenio Arellano, president of the Ecuadorian Episcopal Conference, said that the Government is willing to make any sacrifice to free Paul Rivas, Javier Ortega and Efraín Segarra.

This, after the Interior Minister, César Navas, earlier assured that they activated verification processes of a document allegedly signed by the Oliver Sinisterra front, which circulated in Colombian media, in which the situation of the journalistic team of El Comercio newspaper, kidnapped in Mataje, Esmeraldas, in March.

Navas said that once they heard about the communiqué they contacted political authorities and operative levels of the Colombian Armed Forces and Police. In the neighboring country they would have indicated that they did not know about the veracity of that information.

Navas also denied the alleged offensive military operations of Ecuador and Colombia in the area where the hostages are, as indicated in the alleged statement from the front Oliver Sinisterra.

“What is clear is that we have conducted permanent control operations in the area, but not offensive operations,” said Navas and recalled that once they learned of the kidnapping, they asked the Colombian authorities not to carry out operations that compromise the integrity of the three kidnapped.

Hours later, in Colombia, his defense minister, Luis Carlos Villegas, said that after an intelligence analysis of the text of the statement have not “found elements that allow claiming that it is authentic.” According to him, the presence of the Colombian State in the border area is for the control of the territory.

He denied military landings or special operations in the area where the hostages are “not known and in coordination” with the Armed Forces and the Ecuadorian Police. Villegas insisted that the man responsible for the kidnapping, Walter Arizala, aka Guacho, is Ecuadorian. This in relation to other affirmations of authorities of Colombia that said that it was of that nation.

Yesterday morning, the Reporters Without Borders Foundation; Fundamedios, from Ecuador; Fundación para la Libertad, of Colombia, and the Committee to Protect Journalists, based in New York, United States, issued a joint statement demanding the immediate and unconditional release of the hostages.

“We want clarity and answers about the whereabouts and the real situation of the three kidnapped. We need answers as a society “, said César Ricaurte, from Fundamedios.

“We are considering the scenarios for them to return safe and sound and (the kidnappers) condemn their relatives, loved ones, friends (…), we also want the support of all of you”(international community). Lenin Moreno, president of Ecuador. (I)