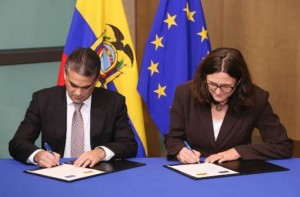 The European Union (EU) and Ecuador signed this Friday, December 12 the free trade agreement, whose negotiations concluded in June, with the confidence it can come into force in 2016 and stressing the importance of the community market for the Ecuadorian exports.

Through this agreement, Ecuador will join the multipartite free trade agreement already in force between the “Twenty-eight”, Colombia and Peru, but with the warranty that in the text has been taken into account the specificities of the Ecuadorian economy, according to Minister of Foreign Trade Francisco Rivadeneira.

“We firmly believe that the agreement that we have reached is of great importance for the future of the country, Ecuador, especially when is taken into account the importance of the European market for us,” said Rivadeneira.

SUMA-Vive and Alianza País submitted proposals for the subway