Ecuador and Venezuela will propose the OPEC to ‘protect the prices’ 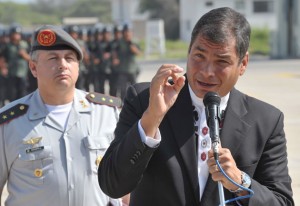 President Rafael Correa announced yesterday that Ecuador and Venezuela will submit a joint proposal to the Organization of Petroleum Exporting Countries (OPEC) in order to “protect prices,” implying “some cut of the production.”

“It’s complicated, but that will be the position of Venezuela and Ecuador,” said the President.

The two countries will present their initiative at the OPEC meeting, to be held on November 27 in Vienna.

Oil prices are currently at their lowest levels since the past four years, and according to Correa, the phenomenon responds substantially to the increase of he United States offer.