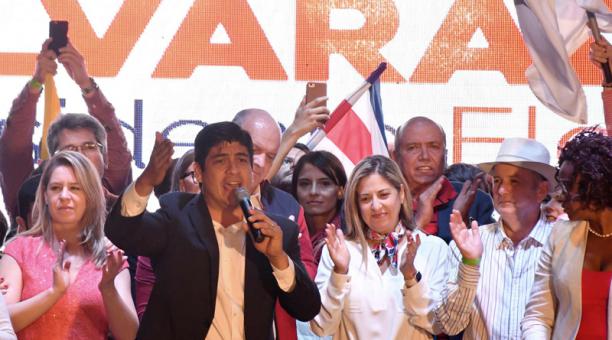 Ecuadorian Foreign Minister María Fernanda Espinosa congratulated President-elect Carlos Alvarado on Monday, April 2, 2018, for his victory in the second round of the presidential elections held on Sunday in Costa Rica.

“We welcome the election day that was held yesterday in Costa Rica, congratulations to Carlos Alvarado, president-elect, and his vice-president Epsy Campbell, the first woman of African descent to occupy that post in Latin America,” the Ecuadorian minister said on Twitter.

Carlos Alvarado, of the ruling Partido Acción Ciudadana, won the elections in Costa Rica with the support of 60.7% of the voters, compared to 39.3% of his rival, the evangelical Fabricio Alvarado

After being elected as Costa Rica’s head of state, Carlos Alvarado, he invited all the parties represented in the Legislative Assembly to join the design of a joint agenda as part of his purpose of achieving unity in the country.

In statements to the press, Alvarado, 38, who will become the youngest president in Latin America in May, said he addressed a letter Monday to all the parties represented in Parliament in which he asks for an appointment to dialogue about the future Government. (I)

Government knew the demands of the kidnappers