Much of the success of the shrimp is attributed to the efforts that the sector has been making to increase levels of nutrition and product quality . After decades of work, this industry has not put aside this bet. Today, improving food standards means even resorting to new technologies. 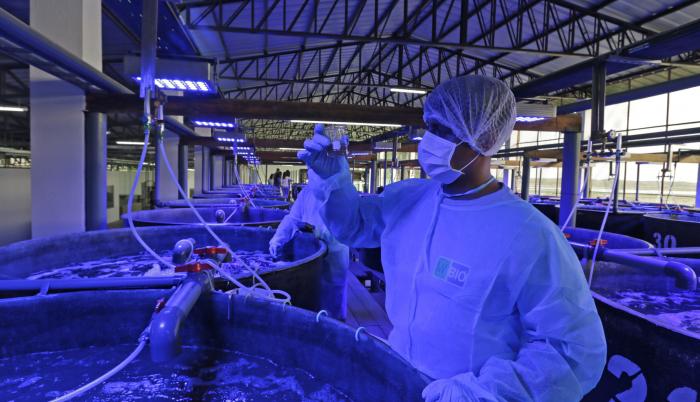 The shrimp that is served at any table, in its first life cycles normally, is fed by artemias, small animals that come from salty lakes and that, in the case of Ecuador, are imported from countries like the USA. UU. and Russia Currently, each larva laboratory is responsible for acquiring them, but since this year, an Ecuadorian company has assumed the challenge of processing them locally, adding certain efficiencies that guarantee a better product.

That was the slogan that motivated the union of Codemet and the Belgian company I&V BIO, to set up the first artemias laboratory in Ecuador and the region, a production space that replicates the same technology that is already used in laboratories that the same international firm You already own in Thailand, Vietnam and Indonesia.

The technique that will be used is that of suspended animation, a technology that allows to stop the metabolic process of artemia to, in a live state, treat its hatching process: the moment they leave their eggs, the same ones that are then harvested and classified in batches to produce the food.

The processes used by larval laboratories are fine, but they are quite handmade.

José Peré Febres Cordero, Vice President of Codemet , explains that larval laboratories (more than 200 nationwide) currently use food under very traditional processes. Although, so far it has worked, it is proven that the maximum level of performance is not being used. “By not stopping their metabolic process they have animals of different sizes that hatch at 18, 24, 36 hours. As they are born in difference of hours, these are growing, but an artemia that doubles in size gets to lower its nutrition level by half, ”he says.

I&V BIO SA began developing this technology 8 years ago, after detecting this problem globally. With the implementation of this technique, he says, it is guaranteed that artemia not only has higher nutritional levels, but that it is free of vibrations, bacteria and microorganisms.

In the act of inauguration of the plant, located in Santa Elena, the Vice President of Ecuador, Otto Sonnenholzner , highlighted the historical struggle that has been going through this industry for years, which in the last 5 years has managed to double its production until it converts the shrimp into the first export offer (more than $ 3.6 billion in 2019). An expected growth will be repeated over the next decade, but at the same time it will challenge the industry to continue modernizing and being more sustainable.

A well fed shrimp grows healthy and reaches the consumer in the best conditions.

In this challenge, thinking about nutrition is key, says Yahira Piedrahíta, executive director of the National Chamber of Aquaculture (CNA) and this must start from the initial phase. Every larva, in its early stages, requires live prey and artemia is the one that best supplements nutritional conditions. “The consumer always sees a beautiful, healthy, appetizing shrimp on his plate, but behind that he must know that there is an entire industry that dedicates many resources on quality, safety, in making it disease free,” he says.

The I&V BIO proposal is innovative and timely, he says. It will allow the country to remain a benchmark in compliance with production regulations that are dictated under the highest standards, internationally. “This is another example that we have an industry that develops without affecting the environment and that we have companies responsible for consumer health and animal care.”

Francisco Sánchez, head of production of the plant, says that the process includes the use of large tanks that, with salt water and lights , simulate the marine environment so that artemia can enter its hatching process.

All control is given under an automation system. When they enter the tank, a system records the time and number of hatching lot , parameters that will help to make decisions that guarantee its performance.

I&V BIO Ecuador plans to start selling artemias starting this month. Initially it expects to produce 400 trays per day, and in 60 days 800; an amount that would be equivalent to between 800 and 1,000 pounds a day. The goal is that, in three months, 33% of the demand can be covered and so until the end of the year, at which time it is expected to reach 66% . The purpose is that laboratories continue to stock up on artemias, paying the same amount they paid before, but for a clean raw material and with better rates that guarantee productivity.

IMPORT. This artemia is imported and moved in cars with temperatures of -20 degrees. They are placed in large tanks with salt water and LED lights that simulate the marine environment.

TREATMENT. Artemia enters the tanks in a suspended state (semi-asleep), there they go through a process of 27 hours until it manages to leave its egg. These are selected.

FINAL PRODUCT. Once the artemia has left the egg, a process of shell separation begins. The input, subjected to various techniques, is compacted and sold in trays.

Ecuadorian universities have equipment to study the coronavirus