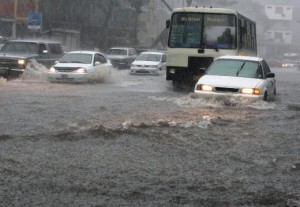 Ecuadorian President is on a solidarity tour at Venezuela and Colombia, countries affected by severe storms.

Correa traveled to Venezuela yesterday, where he donated 11.2 tons of food rations in Caracas and visited several shelters with Hugo Chávez.

Today, the Prime Minister will travel to Colombia, where he will deliver seven tons of food to the victims of the areas of heavy rainfalls with his counterpart Juan Manuel Santos.

“When we were flooded you helped us… Then, when we had the drought in 2008 and had an energy crisis, you sent us millions of energy saving light bulbs, and you never wanted to charge anything. We have a large debt with Venezuela.”

“Helping to Venezuela and Colombia, is helping us. What happens to our neighbors of Colombia and Venezuela also happens to us,” the President said yesterday.

During Correa´s visit, Chávez thanked the support of Ecuador and said that he had no words ”to gauge the presence of President Correa and his government team in the midst of a crisis so big.”