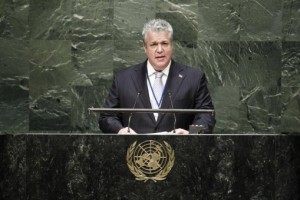 Leonardo Arízaga, Deputy Minister of Foreign Affairs and Political Integration of Ecuador, presented yesterday to Russian companies the investment potential that exists in Ecuador for new strategic projects the country seeks to initiate with a value of USD 28,000 million.

Arízaga explained that the two objectives that have been raised in Ecuador are: to continue fighting poverty and changing the productive matrix of the country.

Currently, he said, it is expected to build “basic industries, ie industries on other industries” in sectors such as copper mining, cellulose, petroleum.

The Deputy Minister offered investment opportunities for foreign partners in new steel and metallurgy projects, shipbuilding, copper refinery and petrochemical industry, among others.

He also explained that for next year it is expected to launch two new hydroelectric projects that still require investments.

Putin achieves the construction of 12 nuclear reactors in India