Ecuador is ready to face Uruguay 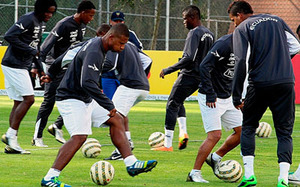 With the arrival this afternoon of the Uruguayan team to Guayaquil, the operating schedule for the match begins. This game is rated as the most important for both teams since the winner will qualify directly to the World Cup Brazil 2014 and the loser must face Jordan in the playoffs.

The operation seeks to reassure players and the Uruguayan delegation since the moment they step on Ecuadorian soil until their departure. For this the police will monitor both teams at their hotels, transfers and training at the Monumental stadium in Barcelona, as well as their trip to Quito tomorrow in the afternoon, according to what was planned by Uruguayan players.

Meanwhile, the Ecuadorian team is training in the House of selection in the capital. There the players receive family visits and support from the fans that come to watch their movements.

In Quito, several institutions have ready their operations. Police said there would be a special control to avoid any inconvenience to safety, outside and inside the court and in the streets of the city.

The Ecuadorian Soccer Federation (FEF) is also prepared to host the show, which will feature in a stadium filled to its maximum capacity and will be televised throughout the country. This includes Quito, as it was authorized to open the signal, considering that is the last game of the local selection for these playoffs and it is sold the total box office.