On Monday, July 6, 2020, the Government took another step in the process of renegotiating the debt in bonds, which amounts to USD 17.375 million by announcing the details of the proposal presented to investors . 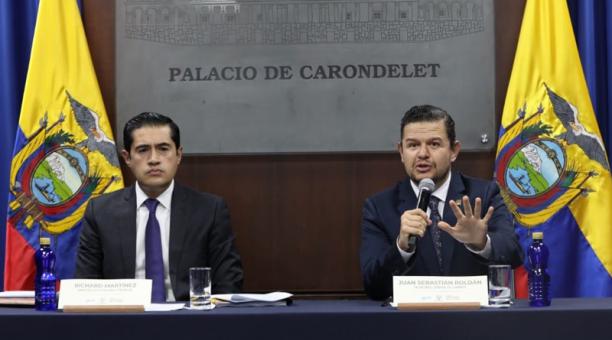 These papers will replace the 10 types of bonds that Ecuador has today and whose maturities begin in 2022 and end in 2030.

If the proposal is carried out , the debt will be paid with a lower interest than the current one.

The current average interest rate for that instrument is 9.3%. With the new bonds , that cost will drop to 5.3%.

The payment term will be longer. With the current structure , the debt tranche will be paid in 2030, but with the negotiation it will only end in 2040.

Capital will be nominally reduced by 9%; but it means a 52.4% reduction in net present value considering all the benefits achieved.

Martinez announced yesterday that a group of creditors that owns about 50% of the amount of these papers has already accepted the plan. For the proposal to materialize, creditors must participate in a formal vote.

The deadline to finalize the agreement is August 15. For Ecuador’s approach to be accepted, a decision of 66% of creditors in each of the tranches is required. This applies to all papers except for 2024 bondholders, where 75% acceptance is required.

Sovereign bonds are papers that a government offers investors in exchange for liquid resources , which must be paid at the end of a certain period.

While waiting for the maturity of the capital, the Government must pay monthly or quarterly coupons of interest to the investors .

In 2008, Ecuador fell into ‘ default ‘ by not paying a tranche of its debt in Global bonds and since then the capital market has closed.

It was not until 2014 when the country was able to reissue these papers, although with high interest in relation to neighboring countries such as Colombia or Chile , as it was considered a risky country.

In the midst of the crisis stemming from the pandemic , Ecuador obtained the consent of the bondholders to extend the interest payment until August, for USD 1,060 million, and go to a renegotiation .

Within the plan presented yesterday, Finance included a proposal to pay those interests for five years from 2026. To do so, it will issue a bond with 0% interest.

In the process, Martínez said he pursues four principles: debt service relief, sustainability over time, an obligation structure that avoids a future default, and more efficiency.

The Government works with the advice of the investment bank Lazar Frères , which also accompanies the process that Argentina undertook.

The Government plans to finalize a new agreement with the Monetary Fund , which will replace the 2019 program.

As a result of all the benefits achieved in the negotiation proposed by the Government, the net present discount (or at present value) for the bonds is 52.4% with respect to their value. Initially, the bondholders expected the discount or loss of present value to be 35%.

Even so, the Regime’s approach was attractive considering that in the Ecuadorian market bonds are sold at an average discount of 60% or more.

This discount reflects the best conditions achieved in the renegotiation that will be made to the payment of interest, a 9% reduction in the value of the capital since the bondholders agreed to collect the capital in a longer term than expected.

In the case of Argentina, the country was unable to reach an agreement because they proposed a 68% net present discount, which was considered very aggressive. Now Argentina is working on a new proposal.

Interest is cut in half

The ‘default’ of 2008 affected the interest rate of the 10 bond issues made by Ecuador since 2014, which is 9.2% on average. This is a high cost compared to multilaterals, which is 5% or less.

In the renegotiation proposal, the Government hopes to replace the current debt with three bonds, which will have progressive interest rates.

Due to the drop in the price of crude oil and the uncertainty surrounding the presidential elections, the bond market is practically closed for Ecuador. Although after yesterday’s announcement, the country risk fell and marked 2,783 points, a reduction of 15.13% compared to the data of the last day.

Without a restructuring, the next governments will have to bear a heavy debt service. The greatest pressure will come in 2027, when 3.5 billion must be paid.

Finance highlighted that it was sought that the amounts to be paid for capital and interest do not exceed USD 2 billion between 2021 and 2030.

After that year, however, payment flows increase, especially between 2031 and 2035 (see chart). “It would be necessary to try that the next public indebtedness expires from 2035 onwards, so as not to hang us again,” said Fausto Ortiz, a member of the government’s advisory council. Analyst Andrés Vergara believes that the Government should control future indebtedness and be more efficient in spending, so that the debt is sustainable.

The principal or principal amount of all the bonds amounts to USD 17 375 million.

76% of that debt corresponds to commitments acquired in this Government, especially between 2017 and 2018.

The plan presented yesterday seeks that this amount be reduced by USD 1,540 million.

Francisco Briones, director of the firm Perspectiva, considers that the strategy adopted by Ecuador was more orderly and with the will of the parties, compared to that of the Government of Argentina, which was more forced.
“The announced agreement is positive to improve the sustainability of public debt, as long as it is carried out,” he said.

Even if this is achieved, the analyst believes that the fiscal problems continue with high current spending that must be corrected and capital investments that must be coordinated with the private sector, in order to achieve true fiscal relief and balance.