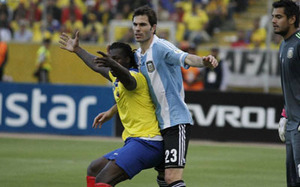 Without its biggest star, Lionel Messi, who is assailed by an injury that will have him paralyzed for two months, the Argentinean selection will play a friendly against Ecuador in New Jersey, USA, on Friday in the path of the two countries to prepare for world cup in Brazil next year.

Ecuador qualified for the third time in a World Cup before, first it was in Korea – Japan 2002, then Germany 2006 and now it has an appointment in Brazil. For that they have provided several warm-up matches, starting by facing Argentina and four days later, on Tuesday 19, they will play against Honduras in Houston.

The Argentina coach Alejandro Sabella, said yesterday that “he worries that it is in the same place” referring to the muscle injury of Lionel Messi, which will prevent him from playing for the remainder of the year and that was discarded from the friendly matches from Argentina in the U.S. against Ecuador on Friday, and Bosnia – Herzegovina, on Monday.

The Argentine captain was injured in the 20th minute of the game in which Barcelona won 1-4 at Betis on Sunday and yesterday it was announced that Messi suffered a muscle injury in the femoral biceps of the left leg taking him away of the game field for 6 or 8 weeks.

Friendly matches between teams will be carried out thanks to the official matches to go to the World Cup play-off in Brazil, among those are Jordan and Uruguay against Mexico with New Zealand, and several European qualifiers finals of Africa.