Ecuador proposes anti-drug strategy, although the US has not yet joined

The Strategy for Security and Peace is the Government’s commitment to combat drug trafficking. The authorities seek the support of the United States. 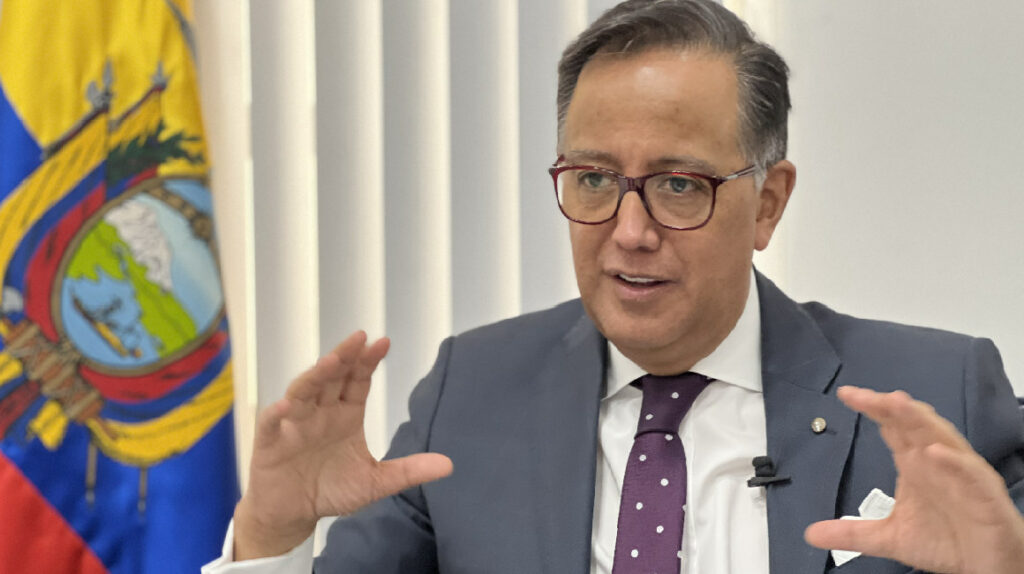 Diego Ordóñez, Secretary of State Security, during an interview with PRIMICIAS, on September 14, 2022.

Diego Ordóñez, Secretary of State Security, spoke with PRIMICAS about the proposal to fight drug trafficking and its scope. In addition, the official explained the questions raised in the constitutional referendum that are part of it.

Regarding the visit of General Laura Richardson, Ecuador presented the Strategy for Security and Peace. What does it consist of?

The Government made a historic decision and not enough value has been given to it in the evaluation of what is being done regarding the security strategy: declaring drug trafficking and organized crime as a threat to the stability of the State.

Why is the inclusion of the Armed Forces important?

Because it allows the Ecuadorian State, through the Armed Forces and the Police, to have a joint strategy that combines capabilities and competencies to achieve more efficiency in the fight against organized crime.

What does the Strategy for Security and Peace encompass?

It is a plan that incorporates these two powers (Police and Armed Forces). Not from the point of view of combination for the purposes of militarizing the fight against drugs, but in the sense of using capabilities to identify the enemy.

That is to say: how it operates, how it works, what its routes are, how drugs enter and how they leave Ecuador, how the money is spread, how the criminal networks are fed.

How will having this information benefit the State?

That knowledge base is the fundamental working platform on which a defense strategy is based. Because if you have not identified the enemy, through a State intelligence structure, it will be difficult for you to be efficient.

So, this articulation starts from the fact of linking the Armed Forces with the Police in an approach: an intelligence war, not a military war.

How was this Strategy built?

We have been working on it for six months and part of it is that intelligence is the strength of any strategy. We have to identify the operation of organized crime with violence and economic operators, in addition to others such as judges, politicians, police and military.

You say that the Strategy originates from the declaration of drug trafficking as a threat to the State. Is it a rhetorical or formal statement?

It is a decision made by the highest state security agency, the State and Public Security Council (Cosepe),

It is clear that the essential part of this plan is information and intelligence. How to go operational?

The Armed Forces have a role, which is to cover borders and the National Police, internal security. What is there to do? In those areas – and in those capacities – you have to strengthen the weakened operational capacity.

Why are these capabilities weakened?

It is the result of a premeditated policy of those who agreed with crime and violence. Now we have to respond so that the operational capabilities, more or less, are compatible with the threat.

What do you mean by that?

It means that the Air Force, the Naval Force, the Land Force and the National Police have operational capabilities that allow us to face the threat.

In Ecuador there is an imbalance. The threat grows, the influence of crime on public security has increased, but if you evaluate the response of the State, it is less in the face of the growth of the threat.

How to achieve this “compatibility”?

We have to start raising the level of operational capacity to reach conditions that allow us to face the threat with adequate capabilities.

It means a strong budgetary sacrifice.

Have you quantified how much it will cost?

Yes, we have quantified, but I cannot tell you how much.

Will this investment be for the remainder of this Government or in the long term?

We have a short-term plan that needs financing, and we have a medium- and long-term program that needs another type of financing.

Cooperation with the United States

What is the role of the United States in this Strategy?

There is a call that President Guillermo Lasso made to President Joe Biden, and we have also made it through various contacts.

Both through Defense Minister Luis Lara, who met with the United States Secretary of Defense. Ecuador’s ambassador to Washington (Ivonne Baki) is very active in promoting Ecuador’s concern about combating drug trafficking within the State Department and the Senate.

Yesterday’s meeting with General Laura Richardson is part of this sequence.

What is the approach?

President Lasso has said that this is a fight that we cannot carry out alone and we need support, international aid and, obviously, a country as important as the United States must be summoned.

In what state is this cooperation, have you received any response?

We have a roadmap; we have to see this. There is a plan that Ecuador has and it is fundamental, we cannot sit down without knowing exactly what we want or how we want to achieve it.

That is planned and we will see from now on how possibilities can be opened and the opening that we have on the part of the North American government, so that this plan can materialize.

Has cooperation for this strategy been requested from other countries?

In this first stage only to the United States.

Does this Strategy connect with the first question of the referendum proposed by the Government on the role of the Armed Forces?

Everything is part of a strategy.

Is the approval of the referendum necessary to apply the Strategy?

I want to underline the fact that the consultation is not going to favor this Government, but rather a State security strategy. This should be understood by politicians and those early detractors who do not even read the question and have already raised voices of rejection.

In short, what is the proposal?

We are talking about the fact that in circumstances in which -for reasons of force, impact and level of threat- the Police cannot act on their own, the Armed Forces resort to support and complement. This is essential that it is not only in states of exception.

If not through states of exception, under what figure would the Armed Forces be mobilized internally?

That is precisely what we hope the constitutional amendment will allow us.

What would be the way?

The path is that there is a threat, the police evaluate, act and there comes a point where that threat overwhelms their capacities and asks for the support and complementarity of the Armed Forces.

Would constitutional control be eliminated to mobilize the military?

No, because there is always a constitutional control. There is always the fact that standards have to be maintained in compliance.

What would the military do in that scenario?

We are not denaturalizing the Armed Forces, we are not going to put them to do an investigation, or collect testimonies, or prepare evidence, but they are going to complement the work of being able to restore order.

How can the Armed Forces act without the necessary training?

It is that what the Armed Forces does is not police activity. He supports the Police. The Police is the one that carries out the operations and the Aramdas Forces support it, they do not replace it. So since they don’t substitute, we can’t say that we are going to instruct them to be police officers.

By proposing this, in one way or another, is it then established that the Police do not have the capacity to deal with what is happening?

The second question of the referendum is in the line of giving way to extradition. Ecuador has banned it since the 1940s, why approve it now?

So there also has to be a transnational jurisdiction, if an Ecuadorian commits a crime abroad and comes to Ecuador to protect himself. It ends with impunity and is protected by this territorial concept.

At the diplomatic level, has work begun on the scenario that this reform is approved and that the extradition treaties have to be updated?

Yes, but they still work. The treaties are there.

But, for example, the treaty with the United States was updated in 1939

There are already other conventions. For example, the Palermo Convention, which is what defines what are the crimes of organized crime.

How does this proposal fit into the current regional panorama? Colombian President Gustavo Petro, on the contrary, has suggested not extraditing drug traffickers who cooperate.

Each country has its governments and the governments make their decisions. We cannot have an opinion about what the Colombian government does, what we can do is push what we think is what should be done.

But is the change in anti-drug and security policies that Colombia is taking worrying?

Not only what could happen with Colombia, but also with Peru, which in a short time is going to be the first producer of coca leaves in the world and it is precisely with crops on the southern border of Ecuador.

Ecuador will sell another 28 million barrels of oil to China