Ecuador relaunches its trade agenda with the united states 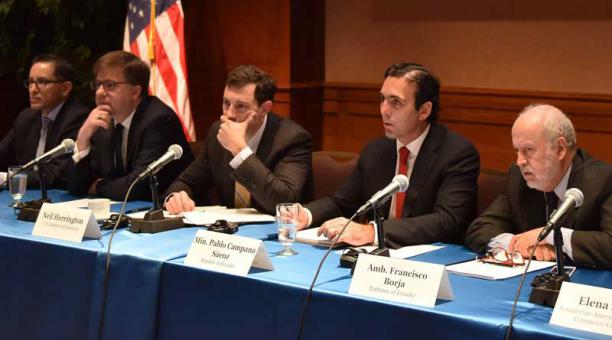 A commercial agreement with the United States, a recurring request from the country’s business sector, is on the government’s agenda, but it is a process that still has to fulfill several stages.

Tomorrow (February 6, 2018), in Guayaquil, and on Thursday, the 8th, in Quito, a meeting will be held to promote a treaty with that country through the First Trade and Investment Forum between Ecuador and the US. meeting, organized by various business associations, involved the Minister of Foreign Trade, Pablo Campana; the United States Ambassador to Ecuador, Todd Chapman; his Ecuadorian counterpart in the US, Francisco Carrión, among others.

The following week, a government delegation will travel to Washington to meet with members of the US Trade Office. (USTR, for its acronym in English). The objective of the visit, according to Campana, is to reactivate the Council of Commerce and Investments. According to Daniel Legarda, president of the Ecuadorian Federation of Exporters (Fedexpor), the reactivation of the Council, whose last meeting was nine years ago, is a positive signal for the country.

The Council discusses issues related to bilateral trade, such as exchange opportunities, regulations that are restricting trade and is the space to propose a trade agreement.

The closest antecedent of an agreement with the United States dates from the period 2004-2006, when the country began to negotiate an FTA, which did not prosper. But since then the situation has changed so much in the USA as in Ecuador.

The administration of the Republican Donald Trump promotes a protectionist trade policy, under the slogan “America Primero”. Ecuador, on the other hand, began to show signs of wanting to open up to trade, although there are three issues that worry, according to Legarda.

One is the customs tax that came into effect last November and has generated questions from Peru and Colombia, which have qualified it as a tax on trade. Another concern for investors is the denunciation of 17 bilateral treaties in the previous administration. And third, Ecuador’s decision to apply import requirements, technical regulations and other procedures that hinder trade, explained Legarda.

The productive sector agrees that a bilateral agreement is positive and will leave more winners than losers. In the last negotiation of the FTA with the United States, it was determined that the Ecuadorian textile industry has more opportunities than threats.

The president of the Textile Industries Association of Ecuador, Javier Díaz, believes that they are complementary markets. “Among the few sensitive issues were the technical regulations of both countries and rules of origin.” At present, the sector exports sweaters, shawls, sportswear and hats. The National Association of Food and Beverage Manufacturers (Anfab) believes that the treaty will increase the export of processed products.

Dairy products were among the sensitive categories in the negotiation of the FTA that was made until 2006. But the sector worked on its competitiveness and now supplies the local market at convenient prices, according to the president of Anfab, Christian Wahli, it does not occur the same with the production of chicken meat, which is not yet so competitive in costs compared to the United States, considered the manager.

According to the head of the Chamber of the Ecuadorian Automotive Industry (Cinae), David Molina, the sector does not oppose the commercial opening with the United States, although it can generate an impact for this industry. The union supported the agreement with the European Union “because it helps more dollars to enter the economy. And people will buy more vehicles; some will be European, but others will be Ecuadorians. ”

The details of the agreement (sensitivities, quotas and other aspects) must be considered when the negotiations start, although there is a worrying topic. According to him, the Government should consider eliminating the 15% import duty on parts and pieces (CKD) for the assembly of vehicles in Ecuador, a key issue “so that the national company can compete”. The expert in commercial negotiation, Juan Falconí Morales, explains that the US is not negotiating new trade agreements. When it did, that nation discussed agreements with a general model for all countries, of the latest generation and where it sought maximum openness. That is why Falconí Morales believes it is difficult for Ecuador to achieve a treaty with the United States. The country must define a global economic program with a clear objective.

A fact that evidences the lack of this program is the contradictory signals between the Foreign Ministry, which has a more protectionist agenda, and the Portfolio of Commerce, which seeks new markets, added the expert.

He also believes that technical studies should be done and updated to assess the sensitivities of the sectors and promote an innovation fund to strengthen activities such as agriculture, services and others.

Between 2004 and 2006, Ecuador began to negotiate a Free Trade Agreement (FTA) with the United States, which did not end. Campana said last month that Ecuador is not seeking an FTA but an agreement similar to the one signed with the European Union at the end of 2016. (I)

Augusto de la Torre: “the projections of the central bank must modernize”