Ecuador shields itself against possible outbreak of measles 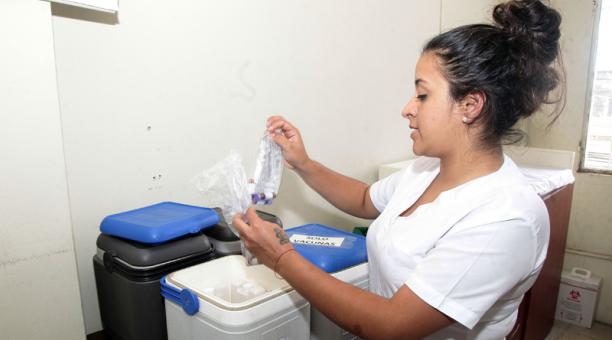 In September 2016, the region of the Americas was declared free of measles. The Pan American Health Organization (PAHO) then announced that after 22 years it became the fifth disease preventable by vaccination to be eliminated. In 1971 the same thing happened with smallpox; in 1994, with polio; 2015, with rubella and congenital rubella syndrome.

In Ecuador, since 2011 there was no case of measles, said the Ministry of Public Health. But on March 9, the country was alerted to the possibility of facing an outbreak of measles, diphtheria and yellow fever. The cause: the migratory flows that Ecuador receives.

The announcement was made by Minister Verónica Espinosa and Gina Tambini, representative of PAHO. And it was recalled that this year it was expected to vaccinate 1.5 million children, from one year of age to children of 15. Yesterday, less than a month after that alert, both authorities confirmed the first imported case of measles. The victim is a small 5-year-old from Venezuela. He entered the Bridge of Rumichaca last Tuesday, March 27. Later, he and his family settled in a neighborhood in the south of Quito.

The viral disease, details PAHO, can cause pneumonia, blindness, inflammation of the brain and even death. Minister Espinosa stressed that it is a highly contagious disease, which can cause death. As of March this year, 10 countries in the Americas reported cases of measles. Of these, Venezuela has the most confirmed cases: 222. In the country, children receive two doses of SRP vaccine, which prevents measles, rubella and mumps, at 12 and 18 months of age. Those who have already applied this vaccine are not at risk of contracting the disease, explained the infectologist Cristina Moreno.

“Vaccination increases the level of antibodies against the virus.” Minister Espinosa informed that brigades will be installed at the border to immunize children and foreigners up to 15 years of age who have not been vaccinated. It will also cover Ecuadorian children who do not have records of previous doses, up to 8 years. Moreno explained that the ideal is to immunize until 15 months of age, but the same can be applied to older people.

In those cases, there may be side effects, such as redness and pain in the vaccination area. As part of the early warning, issued on March 9, the Ministry of Health carries out a plan to strengthen vaccination, epidemiological surveillance and health services of the public network, nationwide.

The Minister said that due to the appearance of several cases in neighboring countries, it was imperative to activate epidemiological surveillance protocols. “We have considerably increased the doses planned for this year, not only to cover the minors but also all the people who have not received the vaccines.” As part of the measures, the National Measles Committee was formed, with the presence of 10 experts. In addition, it has already located at least 10 hospitals that could receive patients suspected of having the virus.

Once the first imported case was confirmed, the Ministry carried out four sweeps, one kilometer away, to rule out other possible cases among those who were in contact with the affected child. This was done in Quito and Tulcán, with the participation of 800 officials. Between February and March, as part of the planned, the MSP placed 2,974 vaccines, said the owner of that Portfolio.

In this regard, he ruled out that the virus circulates in the country. In fact, Tambini stressed that the objective from the PAHO is to avoid the reestablishment of endemic activation. Espinosa insisted that permanent vaccination is part of early warning. The vaccine is available throughout the public network. Schools and colleges will also be visited. In Romania, Italy and Ukraine, Tambini said, more than 10,000 cases of measles have been reported in 2018. The virus expanded because of the migratory flow. (I)

Three films from Ecuador ensured its premiere with a prize