A trailer, which comes from Ipiales, can be seen from the border crossing. You will cross the international bridge of Rumichaca (Carchi) that joins Ecuador and Colombia. Then, an Agrocalidad official beckons to stop. The vehicle moves along the left lane and there, in front of a white tent, for the march. Another official, dressed in a special white suit for disinfection, puts the fumigation pump on his back. Write down the data on a record sheet: product: paper; Origin: Cali. And immediately begins to spray a liquid, 20% quaternary ammonium, on the tires. It covers them completely. The objective: to eliminate any trace of the Fusarium Race 4 fungus that could arrive from the neighboring country. 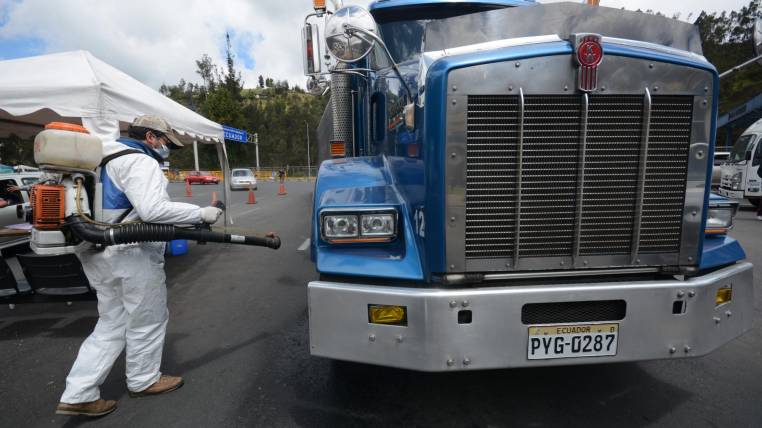 Vehicles that take green bananas to Colombia and then return, receive, after being sprayed, a seal. This is part of the border control carried out by the Government so as not to allow the deadly banana fungus to even approach the country.

The work is part of the biosafety plans and measures that the Government has been implementing for two months, when in the region there was a warning that the Fusarium had reached Colombian farms. Since then, the inspection, according to the Ecuadorian Agency for Quality Assurance of Agro (Agrocality), has not stopped at borders, ports, and airports, but without so far knowing an official balance of what has been executed.

This newspaper, in a visit to the border, could confirm that the fumigation of vehicles is not everything. At the pedestrian crossing, the same official who was responsible for stopping the trailer checked the suitcases of foreigners who entered Ecuador. He did it on a wooden table, under a tent and in front of the Police. People cannot transport plant or animal products. Zero propagative material. A source confirmed to this newspaper that on the same border, three weeks ago, they confiscated three banana hills that Venezuelans were trying to pass. (There were no details if they contained the fungus).

As for the disinfection of footwear, it was observed that a carpet is used which, from time to time, is irrigated with the same chemical: ammonium. Everyone who crosses the bridge must cross there. The soles of the shoes get wet. And a sign announces it. According to the record, until noon last Tuesday, 46 vehicles had been sprayed. They say they are more attentive to the trailers that arrive from the hot areas of Colombia: Cali and Medellín. The operation, they indicate, is 24 hours and seven days a week.