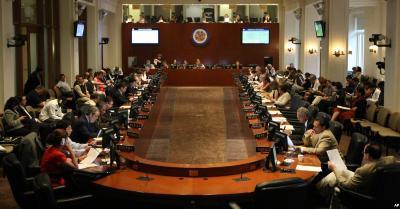 Ecuador will be at the extraordinary meeting of Foreign Ministers which convoked the Organization of American States (OAS) at the request of Argentina. In the event the consequences of the judgment which gives priority to the payment of the funds that did not welcomed the exchange of such debt, will be discussed.

The Foreign Minister Ricardo Patiño, through his Twitter account wrote, “to backup against U.S. sentencing by bond issue” in reference to his assistance.

In this same social network Patiño said that Ecuador was solidary with Argentina over the decision of the judge of the United States that seeks to minimize its successful debt restructuring and forcing the “default”.

The Permanent Council members unanimously supported the body, the only verbal United States abstaining, the motion for Argentina on Thursday that a consultation on the obligation to pay the so-called “vulture funds” is held, as described by Argentina.

The current situation may lead Argentina to a new suspension of payments, since according to the South American country. the domino effect can raise the payment amount beyond $1,500 million owed funds to the rebels, led by NML Capital.