Ecuador will have a broadband like the developed countries 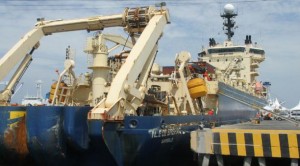 The Vice President Jorge Glas, along with the Minister of Telecommunications Augusto Espín and the Telconet Manager Tomisval Topic, unveiled the project’s progress of the subsidiary Cable Andino.

According to Topic, this will revolutionize the connectivity and will position Ecuador among the countries with higher broadband in telecommunications matters. “We will be at the height of the first world countries and we will have an Internet service of world class.”

The project is headed by Telconet in Ecuador, through its subsidiary Cable Andino, which is a signatory of Pacific Caribbean Cable Systems (PCCS). The Alcatel company ship, Submarine Networks, Ile Debrehat Marseille, it arrived on November 10 in the international port docks of Manta.