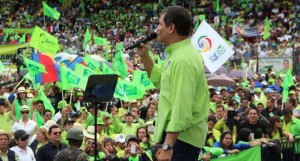 Ecuador will celebrate this Thursday, January 15, eight years of the Government led by Rafael Correa with an event based on innovation, one of the cornerstones of the “Citizens’ Revolution,” as the political project that drives the president is known.

“Thursday: 8 years Citizen Revolution … Ecuador has already changed, but there´s still a long way,” wrote the President today on his Twitter account, where he announced that the eighth anniversary celebrations will seek “to emphasize human talent, science, technology, innovation : the … future!.”

The commemorative events of the anniversary will be held in the City of Knowledge “Yachay.”