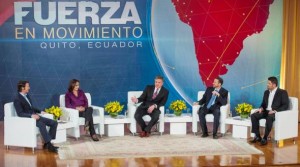 Four exporting Ecuadorian entrepreneurs spoke to CNN about the strengths and challenges they face in the country. The appreciation of the dollar, the payment of profits, international competition, among others, were the topics discussed at a round table under the leadership of Xavier Serbiá, within the Fuerza en Movimiento (Force in Motion) Series.

Santiago Peralta, of Pacari Chocolates; Adriana Hoyos, of AHcorp (exclusive furniture company); Chemel Neme of Electrocables; and Ross Johnson, of Rosa Prima (flowers), agreed that dollarization adopted in 2000 has given stability to Ecuador, but has also forced them to be more efficient.

The businessmen stated that they can not depend on the appreciation or depreciation of the dollar, but on their own business dynamics. By pointing out that to be a successful entrepreneur they must have passion, verify the feasibility of the project and work at least 16 hours a day to carry it forward.

The program is an extension of CNN Money and was recorded last Wednesday night, it will be broadcast on CNN in Spanish on 11 November, at 20:00 (Ecuador time).

Arrested a new intruder who tried to enter the White House