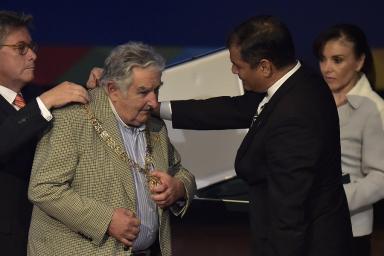 The Ecuadorian government gave to the Uruguayan President José Mujica the highest honor awarded by the National Order to the Merit in the rank of Grand Collar, and argued that it was a recognition to his career “along a militant life dedicated to fighting for the social justice in benefit of his people from different areas, he has become a world-class political reference.”

“I have to thank infinitely, I’m a countryman and the only merit that I have is being a little Basque, shear, but I’m no phenomenon,” Recalling his 14 years in prison in Uruguay for his guerrilla activities, Mujica said in a tone of humor that “years of cana (prison) that grabbed me, were by lack of speed.”

“I do not suck my thumb with this tribute, when leaving I´m going to be the same old that I am (…) If you’re young you have to know this: life escapes you and leaves you every minute and can not go the supermarket to buy life. Then fight for living it, to give content to life,” said Mujica, who was widely acclaimed.