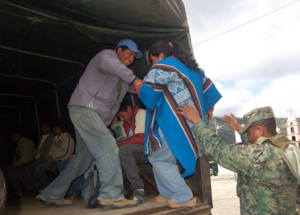 The constant changes in the activity of the Tungurahua volcano have increased its alarm level to orange according to a communication made by the National Secretary Risk Management of Ecuador.

Due to the increased activity the inhabitants of Cusua and the nearby zones of the volcano began to perform their contingency plans and follow their protocols. Around 14:00 the alert system was activated early and soon the community began to evacuate in an orderly manner. However several people are still working in higher grounds of the volcano.

The Volcanic Observatory of Tungurahua informed that they are receiving reports of tremors in populated areas near the volcano. In the city of Baños doors and windows are also trembling.

The Royal Wedding Rehearsal Began Early in The Morning