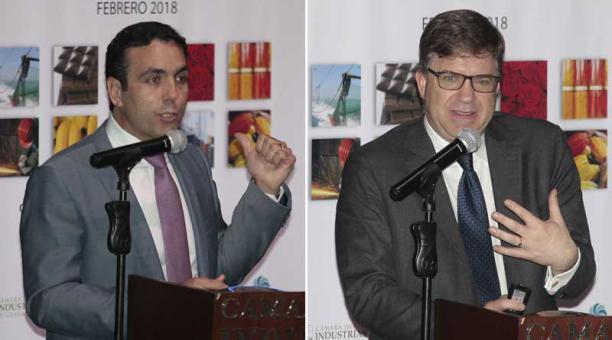 The Government presented this Tuesday, February 6, 2018, an agenda marked by greater commercial openness. The Ministry of Foreign Trade is focused on reaching an agreement with the United States, analyzes entering the Pacific Alliance and moving towards a partial agreement with China with the intention of opening more markets in the world.

The axes of this plan were presented by the holder of the Portfolio, Pablo Campana, within the framework of the First Trade and Investment Forum Ecuador, United States, held on Tuesday in Guayaquil. Campana committed during this meeting to “recover lost time” in terms of commercial exchange during the previous decade, which only highlighted the agreement with the European Union.

He also reiterated that Ecuador will seek a treaty with the US government in the terms reached with the European bloc. To advance this objective, the Minister reported that he plans to travel tomorrow with a delegation to Washington to meet with members of the US Trade Office.

However, the ambitious commercial plan of the Ministry still has to overcome some internal issues that worry investors from abroad. The US ambassador In Ecuador, Todd Chapman, who also participated in the forum, stressed that his country seeks reciprocal agreements in which there is a balanced benefit for both parties.

“We are open to trade agreements, but we need them to be fair and reciprocal,” said the diplomat. Chapman highlighted that issues such as the customs tax, approved last November, the Exit of Foreign Exchange Tax (ISD), the change of legal rules and regulations and the technical obstacles to trade worry the investors of their country.

“These issues need to be addressed before having a serious negotiation,” he said. On the customs rate, Chapman recalled that countries such as Colombia and Peru, which make up the Andean Community of Nations (CAN), asked that agency to rule on the measure and determine whether it violates the principle of free trade.

Those countries also requested an intervention from the CAN when Ecuador implemented the safeguards on imports in 2015. Chapman acknowledged that work has been done with the ministerial authorities to correct these observations. And it indicated as positive the reduction that has been registered in the last months of the country risk indicator.

On the business side, the announcement of an agenda that seeks to deepen the commercial opening generates positive expectations. Entrepreneurs and exporters consider that an expansion of business partners will be beneficial for the country. But first, the observations to internal measures that qualify as “trade barriers” must be corrected.

For Iván Ontaneda, chairman of the board of directors of the Ecuadorian Federation of Exporters (Fedexpor), measures such as the customs tax or ISD “hinder and delay a frank and commercial relationship in counterpoint of what is sought, an agreement.”

The businessman said that Ecuador must send external signals that there are no restrictions on trade. He fears that measures of this kind may generate retaliation against Ecuadorian exports. For Richard Martinez, president of the Ecuadorian Business Committee, the work of the business community has to receive the support of the Government through a public policy of stability.

He pointed out that an international bad precedent was set when the previous Government denounced 17 Bilateral Investment Treaties (BITs). For his part, Pablo Arosemena, president of the Chamber of Commerce of Guayaquil, believes that provisions of this type discourage business in the country. To reach an agreement with the United States, it is necessary to eliminate trade barriers. The SGP is not on the agenda, the country also seeks to renew the Generalized System of Preferences (GSP) in force with the USA until December 31, 2017.

But currently the future of this issue is uncertain, acknowledged Chapman. “I do not know what will happen. Now my Congress is involved in negotiations on many issues and the GSP is not on the agenda. It is very important that you know that this is not guaranteed, it can happen and maybe not. ”  USA It is the main trading partner of Ecuador. 23% of Ecuadorian exports go to that market. Sales grew 12% until November 2017. (I)