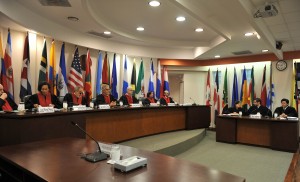 The National Federation of Ecuadorian Lawyers and groups of Ecuadorian citizens will participate in a hearing before the members of the Inter-American Commission on Human Rights (IACHR) to expose their arguments about the independence of justice in Ecuador.

The meeting is part of the 153th session of the Commission that will start next October 27 to 31 in Washington, United States. This case will be addressed by the regional body on October 27, between 18:15 and 17:15, as scheduled.

The Minister of Justice in Ecuador, Ledy Zúñiga, stated that the Government will not attend the meeting and instead, it will send its arguments. She minimized the presence of the Lawyers and citizens in the audience, whom she described as political and of having a political stance.