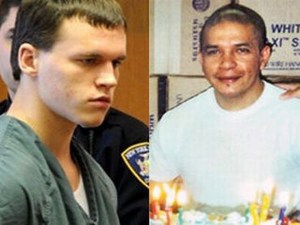 This month Ecuadorian immigrants in Long Island recalled the death of Marcelo Lucero, who was killed a few meters from Cecilia Bonilla restaurant in November 2008. She clearly remembers that every morning she sold him coffee.

“This death was very shocking here,” said Bonilla, a 48-year-old immigrant from El Salvador, “But now people report to the police, whether they are documented or undocumented. Much has changed for that situation. I still hear that people get beaten, but not as much as before. Before it was worse.”

While the Ecuadorian painter Fabian Tacuri, 42, born in Gualaceo, said “there is more confidence, there is not much fear.” Many Ecuadorians live in Patchogue, the town is located 95 kilometers east of New York.

Lucero was stabbed by seven youths, aged 17, who were engaged in assaulting Hispanics as a hobby. They ran into the train station of the town. They insulted with the derogatory term “beaner”. The seven were convicted of a crime motivated by racial intolerance.

Jeffrey Conroy, who was 17 in 2008, was accused of killing him with a knife and now serves a sentence of 25 years.

Three of the defendants: Christopher Overton, Anthony Hartford and Jose Pacheco, would end their sentences in late 2014 and the other three will be released out of prison in 2015.

Constanza Baez, the third most beautiful woman in the world