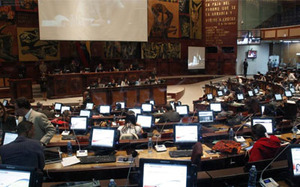 During the plenary session of the National Assembly today, the 100 assemblymen and its government allies plan to acquiesce to veto on the Victims Act draft on of human rights violations between October 4, 1983 and December 31, 2008.

The regime leader, Rafael Correa, asked the Assembly, through a document of seven pages, which is a requirement prior to the payment of compensation to victims’ families, the identification of persons responsible for ensuring state action.

These actions mean that public officials of that time, who are found to be responsible for human rights violations, shall reimburse the State resources.

Finally, the Assembly appropriated to the Ministry of Justice is the entity responsible for performing and negotiating such agreements. The regime leader also asked to avoid paying double compensation for the same offense, so would prevent the State to pay a compensation to all the relatives of one victim.