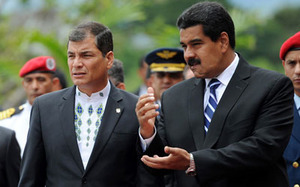 Fausto Herrera, current Minister of Finance, held a position of collaboration with the government of Nicolas Maduro. As suggested by the political analyst Heinz Dieterich, who through an article published on the Internet, suggested that the Venezuelan president should ask help from the regime leader Rafael Correa and his economic team to design a bailout.

According to Herrera each country must define it’s economic and Government plan. However, “as a friendly country we will be ready, if at any time we are asked by Venezuelan authorities, especially the President, to help them with any contingent,” said Herrera.

Ecuador’s ambassador in Venezuela, Leonardo Arizaga, said through an email that “the Venezuelan government is in the best hands.”

In the National Assembly there are different opinions about it. For Gabriel Rivera of Alianza Pais, Dieterich text is a compliment to the economic management of Correa. While CREO official, Diego Salgado, maintains that Dieterich does not knows the current Ecuadorian economic reality, whose budget is based on oil extraction.

Induction gas cookers will have a price soon