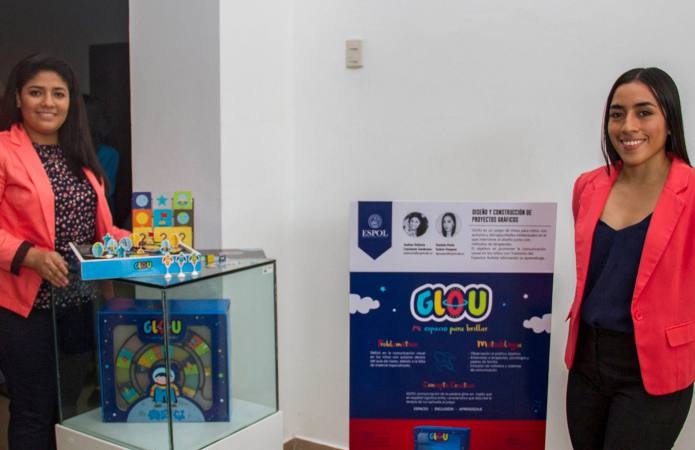 Paola Suárez and Andrea Constante created Glou, a game designed to help in the cognitive and motor development of children with autism in a school environment, and who has just obtained the first place in the category of Social Responsibility in the Latin American Design Awards for students 2017 , in Peru.

It is a contest in Latin America in which the winners receive international recognition for the project presented. “We participate in the student category, we are finalists with a girl from El Salvador,” says Andrea.

She and her partner designed the game last year as an academic project of the integrating subject, to complete their undergraduate studies in Graphic Design, and did not know that the university had enrolled him in the contest, until they were informed that they won.

The game consists of a wooden box with a board that turns on, has dice, primers and an instruction directed to the teacher to guide the student in the activity to be performed.

It is the journey of a child from the earth to the moon. To start playing the child has to throw the dice and according to the numbers that you have to see in the card the activity that you have to perform.

The ex-students of the Espol say that to create the game they visited the Isacc educational center and they noticed that they needed an entertainment with which they work independently, but at the same time interact with the other kids.

They say that there is a person interested in making the game and putting it on sale, but that you have to make some adjustments, including making the box lighter and improving the electrical installation.

“It has a thematic of space, it is a journey of a child from the earth to the moon. It has some obstacles, they are configured with dice, a board and primers. The one who advances wins. ” Paola Suárez, Graduate of the Espol. (I)