BREAKING NEWS
Diana Aguilar, an entrepreneur from Zarumena who opened a coffee shop with an Ecuadorian stamp in Brooklyn
President Guillermo Lasso had his first bilateral meeting with Mexico
Court revokes the nullity in a process against Abdalá Bucaram and others; a judge was suspended
Vice President of the World Bank highlights the level of vaccination in Ecuador
US experts train Ecuadorian public-private team and the Exporter Route is reactivated
Ecuador will have seven participations this Friday, July 23 in the Tokyo 2020 Olympic Games
RansomEXX virus is responsible for the cyberattack on CNT
Imported lentil covers domestic demand in Ecuador and serves as supply to export semi-processed and processed products
New massacre in prisons exceeds the death toll of 2020 and, in response, the president changes the director of SNAI and decrees an emergency
Ecuador receives a new million doses donated from the United States

The Plaza Grande, in the Historic Center of Quito, is surrounded by personnel from the National Police and the Armed Forces.

A march led by university students advances along Guayaquil Street. From 10:00 on this Thursday, October 3, 2019, the ministers that make up the ministerial cabinet began arriving at Carondelet Palace. 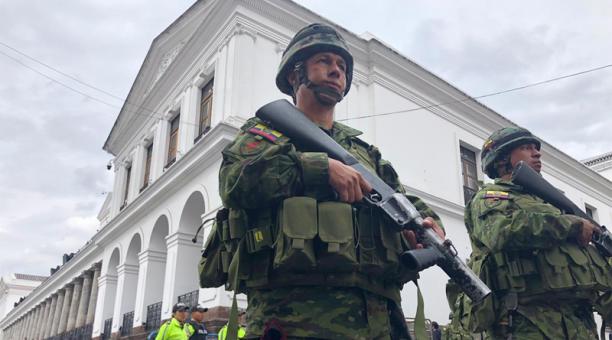 Richard Martínez, Minister of Economy, on arrival, said the Government will maintain the announced measures. He also indicated that “security and order are guaranteed throughout the country.”

Andrés Madero, Minister of Labor, also arrived for the official appointment, scheduled for 11:30. He said that a dialogue will be initiated with all social and productive sectors, as long as it is done in a respectful manner.

He added that talks are held with the carriers, who since the dawn of Thursday paralyzed their activities. “We will listen to all sectors as long as there is order. Everyone’s rights must be respected, ”he said.

According to Martínez, the impact of the economic measures proposed by the Government will be analyzed in the Cabinet this morning.

Some Secretaries of State will participate by videoconference. The entire Government Palace is guarded by members of the Armed Forces, equipped with riot gear.

A special command contingent was also deployed, who remain in the area around the site and inside Carondelet.

The Government suspends classes throughout the national territory