Ecuarunari denies registering statute of the Confederation of Kichwa Peoples 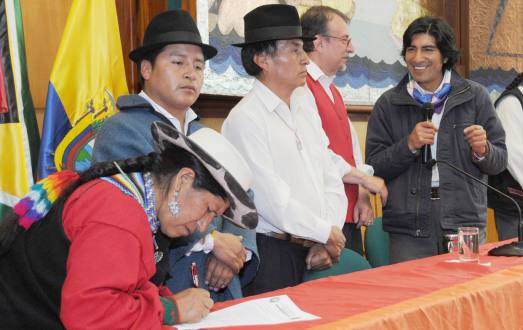 The Ecuarunari, subsidiary of the Conaie from the Ecuadorian highlands, announced that it will not register with any Ministry through the Unified Information System of Social and Citizen Organizations (Suios), as required in the Decree 16, approved on June 4, 2013, for its legal operation in Ecuador.

On September 8, the organization made ​​official in a ceremony at the Universidad Andina Simón Bolívar, its civil disobedience to this provision.

The group explained that it assumes its right to self-determination provided in the Constitution, taking into account they are “ancient communities, pre-state with rights to the difference and equal ” and they issued two decrees before it.

In the first they indicate that “they will not comply the provision of the statute registering of the Confederation of Kichwa Peoples of Ecuador.” In the second decree, the Ecuarunari ratified the legitimate exercise of indigenous justice and authority of implementing it of the Community authorities, ignoring the Constitutional Court.