El Telegrafo had revenues of $ 18 million by year-end 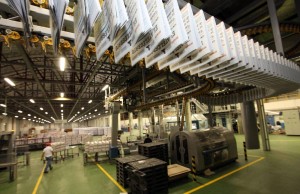 In December 2015, the public company El Telegrafo EP, which publishes the newspaper of the same name and which is hired by the government of Rafael Correa to print its publications, recorded revenues of $ 18.4 million and thereby managed to balance its budget, which had faced difficulties from January to November.

Its earned income, for the sale of goods and services, until last November, had been set at $ 27.2 million, while its accrued expenses exceeded that figure, since that month they were at $ 42.6 million. This, according to information published by El Telegrafo EP on its website, in paragraph G of transparency section, which corresponds to the annual budget of the company and which details income, expenses, financing, operational results and the settlement of its budget.

The $ 18 million El Telegrafo EP received in December are equivalent to 40% of total revenues in 2015 ($ 45.7 million), and are the highest values recorded in the balance sheet, since in its income record, from May to November received less than $ 2 million a month, with the exception of July, when sales of goods and services totaled $ 7.9 million. From January to April budget information is not recorded on the website www.eltelegrafo.com.ec.