The National Electoral Council (CNE) sent to the Constitutional Court (CC) a demand for conflict of powers, regarding its powers to organize the national elections of February 2021, in response to the judgments of the Contentious Electoral Tribunal (TCE) . 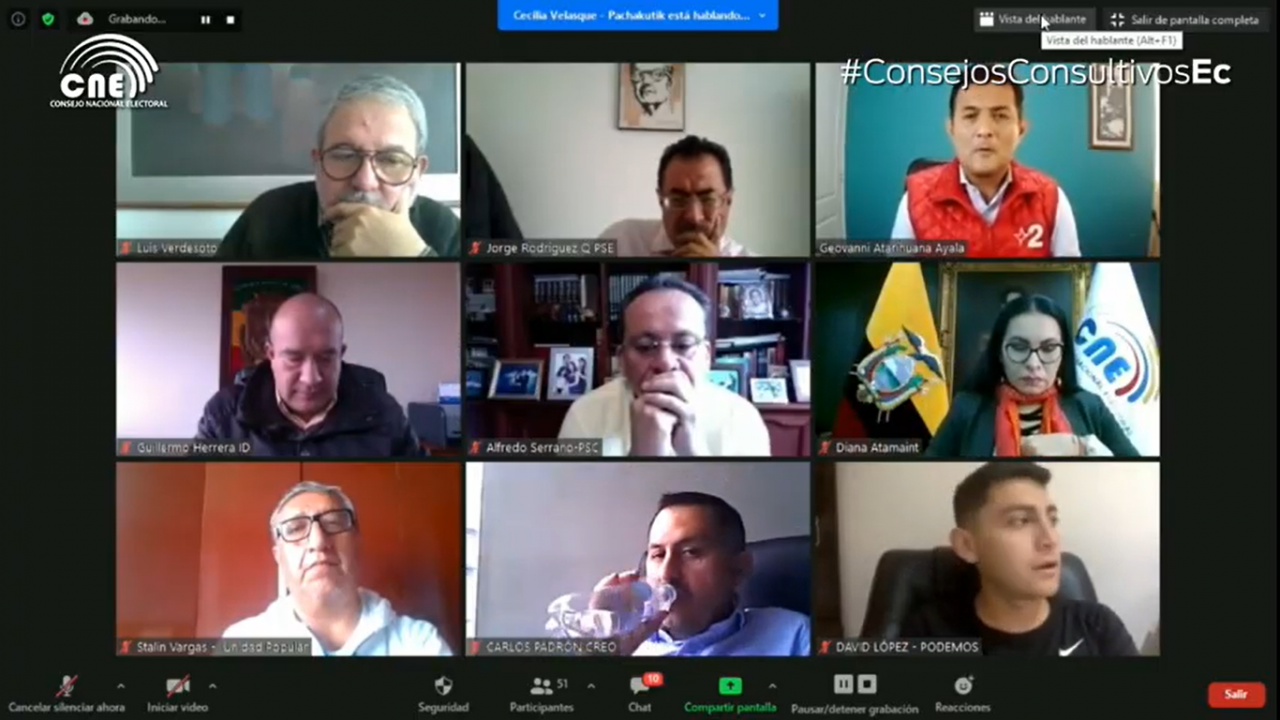 It was announced by the president of the Council, Diana Atamaint during the IV Consultative Council of Political Organizations, convened for this Tuesday, September 22.

“I have sent the query to the Constitutional Court today, where a broad explanation is made (of the reason for the lawsuit). But the process must continue, ”Atamaint noted.

This lawsuit arose after the TCE ordered the CNE to adopt comprehensive reparation measures in favor of the Social Justice movement , so that new deadlines are enabled for it to carry out internal democracy and choose candidates, register them and qualify them to participate in the elections. .

The CNE ruled that the deadlines for carrying out these activities “precluded”, it demanded that the Court respect its administrative powers to organize the elections; and decided to present this demand to the CC.

For not giving way to this judgment on comprehensive reparation measures, the ECA is processing a complaint for electoral infringement against the councilors Enrique Pita, José Cabrera, Diana Atamaint and Luis Verdesoto , who approved the aforementioned resolution dated December 14. Counselor Esthela Acero abstained, and was not reported.

The request for sanction was presented by Jimmi Salazar, national director of Social Justice, who asks for the dismissal of the four members, loss of political rights and a fine of 70 basic salaries. The case is being processed by Judge Patricia Guaicha, after Judge Ángel Torres was challenged , who initially called an oral hearing with the authorities and complainants, for next December 26.

Meanwhile, the political organizations asked for legal certainty and guarantees for the development of the 2021 general elections.

In the advisory council, representatives of eleven national political movements and parties expressed their concern about the lack of certainty in the organization of the elections, given the political struggle between the CNE and the Court.

Cecilia Velasque, deputy coordinator of Pachakutik (PK) questioned that despite the “legalities” that are said in the Electoral Function, “the dates set for the electoral process are immovable.”

He claimed that “they are not giving credibility and” we would not like to arrive with doubts “on voting day, he said.

Guillermo Herrera, president of the Democratic Left (ID) also questioned that these political confrontations “are not providing legal security and guarantees.”

Geovanni Atarihuana, national director of Popular Unity (UP) said that the Council must “assume its decisions”, because the Constitutional Court could delay in ruling on a demand for conflict of competences, and the start of the printing of ballots has not yet been resolved electoral.

According to Atamaint, this activity was expected to begin on December 15 with the Military Geographical Institute (IGM), but the last “deadline” would be January 7. “Not a single ballot has gone to print, because the candidacies have not been defined, but if the CNE makes the decision to send the ballots to print, we would be on time,” he stressed.

Alfredo Serrano, national director of the Christian Social Party (PSC) supported the Council, and stated that giving new deadlines for the registration of candidates for Social Justice would delay the calendar by 53 days.

“Overnight a movement appears and the ECA decides that we are going to give it very special treatment… The calendar must be respected, we did not like it, but we abided by it. The decision will have to be made by the CNE, ”Serrano said.

The vice president of the Council, Enrique Pita assured the political subjects that the CNE “has not disregarded any provision of the TCE, we have worked to guarantee and respect the rights of political organizations and candidates.”

In the end, Atarihuana suggested that one of the resolutions of the advisory council be to approve a manifesto of the political organizations so that the electoral calendar is respected.

In this political event, the parties and movements are also informed about the biosecurity measures that they must comply with during the walks and caravans, which are carried out in the electoral campaign that begins this December 31.

Justicia Social Movement: a brief account of its struggle towards an electoral race