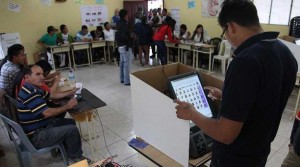 The National Electoral Council (CNE) planned for the elections of 2017 that 50% of Ecuadorians defray through electronic voting, but this will not be achieved.

The agency’s decision of not applying the modern voting system is known today at a plenary session at the Santa Maria enclosure, in La Manga del Cura, where the budget for 2016 will be approved and it is expected to know the reforms of the Democracy Code.

Three would be the arguments to freeze this method: the first indicates that it would be feasible to apply this system in a part of the country, because it is a vote for authorities at national level. Therefore, while the electronic voting deliver results in approximately two hours; the manual vote has recorded waits of up to 20 days. That time lag complicate the delivery of unified results.

The second refers to the existence of actors who have pointed out that through this mechanism it is possible to forge an electoral fraud. In this regard, Pozo spoke of being “consistent with those voices” and if there are doubts “to continue with the traditional voting ballot.”

The third-and the more complex-is the economic issue. Within an austerity policy, as Pozo announced, the implementation of this voting mechanism requires an investment of around USD 145 million. Moreover, within an electoral process the normal cost of the voting ballots is USD 7 per person, while the cost of the electronic voting is USD 14.