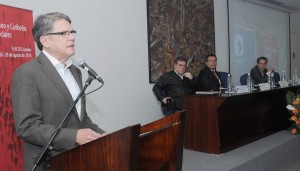 The chancellor in charge, Xavier Lasso, said yesterday that the response of the legal secretary of the Presidency, Alexis Mera, to the Archbishop of Guayaquil, Monsignor Antonio Arregui, for his statements about the dialogue the Government called, “ruined” a claim through the diplomatic channel.

In a radio interview with Ecuadorinmediato, he said he does not share what Alexis Mera said and that the note prepared to the nunciature was ruined; “he diverted attention away from the diplomatic aspect elaborated from the Foreign Ministry with those pronouncements out of place … that even hurt us.”

Lasso indicated that the statements of Archbishop Arregui are “dangerous because it is a very clear incitement” to protest. The bishop said: “The opportunities for discussion of public affairs have been dangerously restricted so that the streets are left to deal with the discontent.”