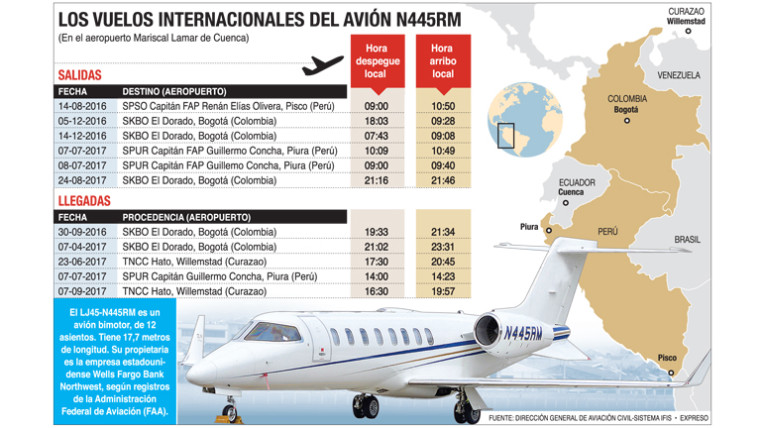 Under the protection of a controversial permit, the aircraft used the Cuenca airport for international travels. The DGAC carries out an internal investigation.

Thursday, September 7, 2017. A Learjet 45, N445RM, with capacity for nine passengers, departed at 16:30 p.m. from the Hato international airport, located in Willemstad, Curacao, and after three hours and 27 minutes, it landed at the Mariscal Lamar Airport, in Cuenca.

It was the last of eleven international flights of that private aircraft since 2016, which transported executives of the Eljuri business group.

Under current laws, except in cases of emergency, aircraft may only enter or leave the country at international airports set by the DGAC, which is the authority that regulates air operation in the national territory. The airport in Cuenca does not have that status.

The authorization for the international operation of the aircraft mentioned above had been granted on March 22, 2016, by Roberto Yerovi, then head of the DGAC.

The Attorney General’s Office is aware of the details of the N445RM flights as part of its investigation into alleged illegal money collection. In the past days, judicial authorities issued a pre-trial detention order against businessman Juan Pablo Eljuri and ordered the raid of his offices in Cuenca. (I)